I’m always on the look out for the puuurfect eyeliner! I do a winged eyeliner almost every day.. Sometimes as the only makeup I’m wearing (well, apart from brows, blush and highlight, but that is a minimum if I’m wearing makeup at all).

I was very excited to read that Kat Von D did a bunch of new eyeliners and couldn’t wait to test them. I’ve been a fan of the Tattoo Liner for a few years now, but also thought it didn’t get quite black enough! Before that, my long term fling has been MACs liquid liner in boot black, but it’s not waterproof, so the Kat Von D has an extra appeal especially during the hot summer. I recently got married, and waterproff was definetly something I wanted to go for.

I know a lot of people have been bashing and boycutting Kat Von D lateley because of her AntiVaxer views, I don’t agree with her at all, but I’m really not that politically correct that I could boycut a makeup brand that I love and that puts alot of people at work. I’m sure a lot of Kat Von Ds employees don’t agree with her views either, and I have found the online witch hunt of her that followed quite distasteful.. People who write that ‘I hope your baby dies’ to a pregnent woman is just a bit too much for me.

With that all clear, let’s get to Dagger and Lash Liner!

I’ve been wearing Dagger Liner almost every day for over a month now, and I absolutely love it! It goes on very easy for a doing a winged liner, and eventhough it’s the same formula as the tattoo liner I find that it goes on blacker and more solid than it. It just stays there.. Some lazy evenings where I haven’t taken my makeup off before bedtime, it’s still there the next morning looking sharp AF! The shape of the the brush makes it very easy to apply, and we need all the help we can get doing the tricky winged look on busy mornings. Definetly a recomendation from here when you need to get yourself a new eyeliner!

The Lash liner is also quite something.. a waterproff lashliner, that really got my attention. I must admit that I don’t line my lashes as often as I did when I was younger (all the time!!), but I do like the dramatic effect of it every once in a while. The main problem with most lashliners is that they either don’t go very black or they don’t stay for very long.. Some of them even travel down your cheeks for a sad panda look. The Kat Von D Lash Liner just stays there and goes very matte black! The application can be a bit of a hassle, I haven’t succeded in not getting it into my eyes yet when applying it.. But eventhough a few tears starts running it doesn’t affect the liner. And when it’s on there.. It’s really on there, and sharp looking. I absolutely love that it’s matte black. If you like a good old fashioned kohl instead I would get MACs Smolder pencil, it’s been my fave for many years and it also wears very well, only need about one refresh pr day.

Hope you got a bit out of my eyeliner rant! ❤️

You can get the Kat Von D liners at Sephora.

(This is my personal views, I buy my own products) 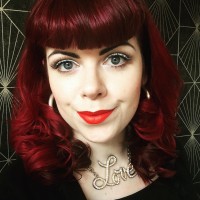